What is the value of awards? Recognition? Perhaps. Appreciation? Not really. Monetary? I think so. I’ll admit that I was a cynic when it came to educator awards, and I was initially against the idea. But as I dug deeper, I began to see the value of awards, especially for those with different perspectives from my own.

But first, the cynicism. Do a Google search for “Top Doctors Awards,” and you’ll get a litany of websites that offer to craft you (the doctor) a personalized plaque naming you as the recipient of any Top Doctor award that you’d like to make up. Do you want to display a ‘Top Doctor’ award in Osteopathic Pediatrics in your waiting room? No problem. There’s a company out there willing to create the plaque of greatness for you. Frightening. The truth is, there are no real top doctor awards out there (or at least none that I could find). And that’s a good thing. All doctors should be striving to be top doctors. They hold people’s lives in their hands; healing should be their motivation and professional pursuit, not a plaque to hang on their wall. Though educators do not share that weighty responsibility of saving lives, some of the same rules do apply. Teachers hold young minds in their hands, and educating those minds to the very best of their ability should be (in my opinion) the sole motivator towards educational greatness.

If you dig deep enough into the zeitgeist of awards, you begin to see that they exist as a measure of greatness for those who earn a living as independent contractors, and they increase the value (and cost) of the awardee’s services. The two most common types of awards that come to mind are those for artists (the Oscars, Grammys, Tonys, Emmys and Golden Globes) and those for athletes (MVPs, Golden Gloves, and All-Stars). At their core, both artists and athletes are independent contractors. They negotiate contracts to provide their services for a larger organization, whether that be a sports team or a Hollywood studio. Awardees in both categories can command much larger fees as a direct result of their awards. Actors typically earn much larger salaries after winning Academy Awards, with Halle Berry earning $14 million after her Oscar, Adrian Brody earning $10 million after his, and Hillary Swank jumping from $3000 for acting in “Boys Don’t Cry” to immediately breaking the $1 million boundary for her next film after winning an Oscar. On average, winning an Oscar results in a 20% pay increase (source). So yes, an awards system and structure makes sense in these markets. The recognition of winning the award translates to higher compensation. For independent contractors such as artists and athletes, the external validation of greatness that winning an award provides is its own commodity.

But educators are not independent contractors. Whether we are in K12 or higher education, our salaries are typically determined by complex formulas that take into account metrics like years of service, continuing education credits, degrees earned, etc. There is no variable in those formulas for awards (nor should there be, in my opinion). So for us in education, awards are not the commodity that they are for athletes and actors. What, then, do awards offer? In the article, The Importance of Awards (Communique PR, January 30, 2012), the point is made that awards offer visibility, validation, testimony, reputation, and differentiation. Do teachers benefit from greater visibility? Not really. Students usually don’t have a choice for their teachers, so increased visibility does not affect demand or enrollment. So what’s the point? The same applies to testimony. Whether a teacher is lauded or derided, still they will be assigned students for the following term or semester. And differentiation? Every teacher who is reading this right now would probably agree that differentiation is the last thing any teacher wants. It typically breeds resentment and jealousy among colleagues making the teacher’s lounge, the lunch table or the department meeting awkward and unpleasant. That leaves us with validation and reputation.

In the article, The Importance of Awards (The Times of India, February 2, 2010), Pritish Nandy correctly states, “teachers are clearly not those who enter the profession in search of money.” True, and awards don’t help with teacher compensation anyway. But Nandy goes on to say, “Awards do not only acknowledge success; they recognize many other qualities: ability, struggle, effort and, above all, excellence… That’s where awards play a crucial role. Not everyone’s lucky enough to get the money and rah-rah he or she deserves. Those who do not, manage to get by because of the support and recognition awards give them.” To me, Nandy is oversimplifying the issue just a bit. I believe it comes down to personal motivation.

For those intrinsically motivated educators, teaching is its own reward. They teach at their very highest level because it is the right thing to do. They get personal satisfaction by watching their students learn deeply and genuinely. And they are motivated by a desire to earn their keep, whether their salary is paid by town tax dollars or tuition revenue. For those who are extrinsically motivated, however, pickings are quite slim in education. There are school, district, state and national Teacher of the Year awards, yes, but often politics are at play for those, with popular teachers getting the lion’s share of recognition. For teachers needing external validation and for those that value and judge their own reputations through accolades from others, awards are a necessity. They push themselves towards greatness in pursuit of such recognitions (and that is not a bad thing), and awards are deserved.

So as FLGI rolls out a new structure of awards specifically for educators, nominate those teachers who you see are making a difference. Give them the external validation they deserve. Yes, those who are intrinsically motivated will probably kick the dirt in front of them in an “aw, shucks” moment. They may even turn down the nomination, and that’s OK. In fact, it’s not to be judged; it’s to be lauded and celebrated. But for educators who are extrinsically motivated, that nomination will be a transformative recognition of years of hard work and effort. And, it will likely lead to redoubled efforts and an even better experience for each student that passes through that classroom. And you know what? That’s OK as well. In fact, it’s also not to be judged; instead, we need to celebrate that too.

Dr. Thomas Mennella
I have been an instructor in higher education for over ten years. Starting as a lecturer at the University of Massachusetts – Amherst, and then moving on to an Assistant Professorship at Delaware State University (DSU), a small public university, I experimented with Problem-Based Learning (PBL) and was an early-adopter of the iClicker student response system. Now an Associate Professor at Bay Path University, a private liberal arts institution in western Massachusetts, I primarily teach Genetics, Cell and Molecular Biology. I am Flipped Learning 3.0 Level -II Certified and a founding member of the FLGI International Faculty.

Tom, I loved this article. It is all so true. Another part is that teachers who are innovative and do more sometimes get ridiculed by their own staffs as the “over achiever” or the “admin’s pet.” Here’s to continuing with the intrinsic motivation to always help our students learn, no matter what the backlash may be. Award or no award, our students deserve the very best each of us can deliver. 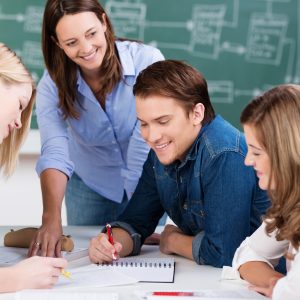 -Dan Jones- It is so easy to get sucked into an episode of some fixer-upper show on PBS or HGTV. As I watch, I start to think...