Just a few weeks ago, a major advance was made in the field of education. The core components of high-quality education were identified and arranged into a useful infographic. That graphic instantly made me think of another, much older, image. Let me show you that image which, for some of you, will be a thing of elegance and beauty and, for others, may stir up some bad memories of frustration and struggle. 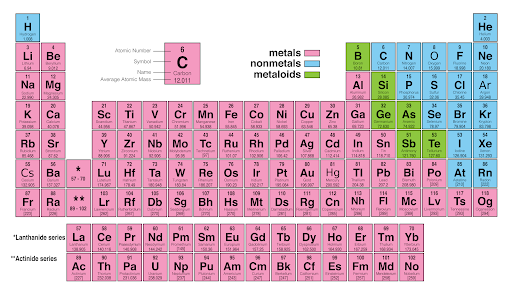 Yes, the Periodic Table of the Elements (which turns 150 years old this January, leading to 2019 being declared the International Year of the Periodic Table!). What you see to the right are the building blocks of the universe. Every single thing in all of reality is made up of nothing more than the things listed here, or combinations of them stuck together. Indeed, these are the Lego blocks of everything around us. Amazing, no? But the chart we see here is more than a list of elements that you had to memorize and interpret in the 11th grade. It represents a feat of human ingenuity, the power of organization, and the fruits of opportunity that become possible with careful attention to detail.

In the mid-1800s, long before the elements listed above were ever known, Robert Bunsen (of the Bunsen Burner) began burning whatever he could find. In doing so, he discovered that most things burned different combinations of colors, but more so, some things only burned one distinct color. This gave him the insight that a few things were indivisible (the building blocks themselves), while most things were made up of combinations of those few indivisible blocks. Thus was born the notion of ‘elements’ and ‘compounds,’ respectively. Just a few years later, a Russian chemist named Dmitri Mendeleev organized these ‘elements’ by the different colors they emitted while burning, but as more was learned about each one, he switched to organizing them by their weight (or, more accurately, by their atomic mass). In doing so, Mendeleev realized that the masses of these elements were periodic: they were evenly separated and followed a pattern. He used this pattern to organize the elements horizontally, in rows, as a table – a periodic table, in fact – and found that doing so also self-organized the elements by chemical reactivity vertically! Yes, the elements fell into columns where each element in a column behaves similarly in chemical reactions. Suffice it to say, with the development of the periodic table of the elements, the field of chemistry was forever changed.

Well over a century later, in the realm of education and pedagogy, a team of educators from all over the world (49 separate countries) worked collaboratively to identify the core ‘elements’ of high-quality teaching through the lens of Flipped Learning. These educators quickly realized that the educational elements they were discovering – these core building blocks of high-quality education – were related. They could be grouped into columns where the elements in any given column are related and behave similarly in educational applications. Like Mendeleev’s from a hundred years before, these elements were arranged into a table that inherently highlighted their relatedness and properties called the Global Elements of Effective Flipped Learning (GEEFL).

Like Mendeleev’s table before it, this GEEFL table is a thing of beauty, elegance and a feat of human ingenuity. It represents the core building blocks of effective teaching and learning. All good education will be made up of combinations of these pedagogical ‘lego pieces,’ and any demonstration of masterful teaching can be dissected down to combinations of the indivisible core elements found on this table.

But let’s take a moment to appreciate something more. The Periodic Table of the Elements that we use today is the modern version, having undergone decades of revision. The GEEFL table is still in its infancy; recently developed and a work in progress. A better comparison to the GEEFL table would be this Mendeleev table, from just a few years after his death:

And, to me, a trained biologist and so a fairly lay chemist, this is the coolest thing about the history of Mendeleev’s periodic table: it was predictive! Because of the repeating nature of the elements’ properties, Mendeleev and the chemists who came after him could use gaps in the table to predict the existence of elements that had been thus far undiscovered. And, almost every single time, those predictions were accurate with elements discovered later on that fit perfectly into those gaps (incredibly, the most recent element that fit into Mendeleev’s table was discovered only five years ago, in 2013!). Think of how amazing that is! Simply by organizing the known elements logically, insights and discoveries were made that were otherwise invisible. This chart, and nothing more than this chart,revealed the existence of undiscovered building blocks of the universe… Wow!

Now, look once again at the GEEFL chart above. See those gaps? See those blank spaces in the table? To me, those represent educational elements left unrevealed. More indivisible building blocks of quality education are being used out there just waiting to be discovered by the rest of the educational community. As we all look ahead to 2019 and imagine where our role as an educator will take us, let us realize the awesome power of the GEEFL table and be inspired by it, just as Mendeleev’s table inspired chemists a century before. Let’s use these elements to build amazing educational experiences that reach each one of our students every day, and let’s also fill the gaps by innovating and discovering more core best practices that can help deliver the best education possible to our students. The building blocks of teaching excellence are now in hand giving us the tools and roadmap to be wonderful. It’s time for each of us to set off and do amazing things in our classrooms. The future of education is now. Happy New Year!

(*Note: the historical content regarding the development of the Periodic Table of the Elements was adapted from Sam Kean’s amazing book: The Disappearing Spoon. A highly recommended read for any novice chemistry buff, like me.)

Failure = Learning: Education Is About Persistence, Not Perfection

Sometime in the Not Too Distant Future