The Six Good Reasons You Should Consider Second Chance Grading

In the January 2020 issue of FLR, I wrote about my “New Year’s” commitment to explore alternative assessment strategies for measuring student learning. This resolution was inspired in part by my work with eReports and Mastery Checks (which I’ve written about here). But it was refortified by the amazing talk that I saw given by Dr. Oscar Fernandez at the 2020 Massachusetts PKAL Network Winter Meeting at Framingham State University. Dr. Fernandez is an Associate Professor of Mathematics (as well as the Faculty Director of the Pforzheimer Learning and Teaching Center and of the Andrew W. Mellon Grant for Evidence-Based Teaching Innovations) at Wellesley College. Dr. Fernandez presented on Second Chance Grading, a novel and high-impact approach to scaffolded assessment that he has developed.

By way of introduction, achievement gaps are typically first and foremost on Dr. Fernandez’s mind. Why do fewer women and students from under-represented groups enter the STEM pipeline? This topic is near and dear to Dr. Fernandez in part because he (like myself) teaches at an all-women’s college. It is for these reasons Dr. Fernandez began experimenting with alternative assessments.

He began his teaching career with a grading structure most of us would recognize (indeed, that most of us use). Homework was worth 30 percent of the final grade (somewhat typical for a math class), quizzes were worth 10 percent, two-unit exams worth 15 percent each, and a final worth of 30 percent. If you take a step back, you see that 70 percent of the overall course grade is, therefore, based on relatively high-stakes assessments. Essentially, success in this course came down to doing well on quizzes and exams. Recognizing that this grading structure promoted stress, anxiety, cramming, and studying toward and teaching toward the test, Dr. Fernandez resolved to devise a new grading structure that would intentionally deemphasize and counter these negative behaviors. He committed to a grading structure that would:

Research into teaching and learning showed Dr. Fernandez that low-stakes assessments were superior to high-stakes, that frequent testing was superior to infrequent testing, and that Mastery Learning was almost magical in its ability to promote true and lasting comprehension of course content. So he decided to roll these aspects into his new grading strategy as well. And from all of this, Second Chance Grading was born.

The structure of Second Chance Grading is quite simple. Dr. Fernandez divided his course up into 20 discrete topics. Two topics are covered each week, and his students are quizzed on those topics weekly (for a total of 10 quizzes over the semester; each quiz is designed to take 20 minutes to complete). Like before, there are two unit exams, but these are now called “Second Chance Days.” On these days, students are quizzed on the two new topics from the previous week, but they’re also granted the opportunity to retake any previous quiz that they’d like to replace. This retaking of old quizzes is optional; if students are happy with their previous quiz grades they can elect to keep those. The final exam for the course includes a mandatory comprehensive section that all students must complete, but the remainder of the time can be used for retaking any previous quiz from the entire semester. Each second chance quiz is different, though with similar questions and content (of course), so Fernandez truly is implementing a Mastery approach; students can’t ‘learn to the test.’ And this structure gives students three chances for mastering the material. The schematic below is Dr. Fernandez’s flowchart for how he implements Second Chance Grading in all of his courses. 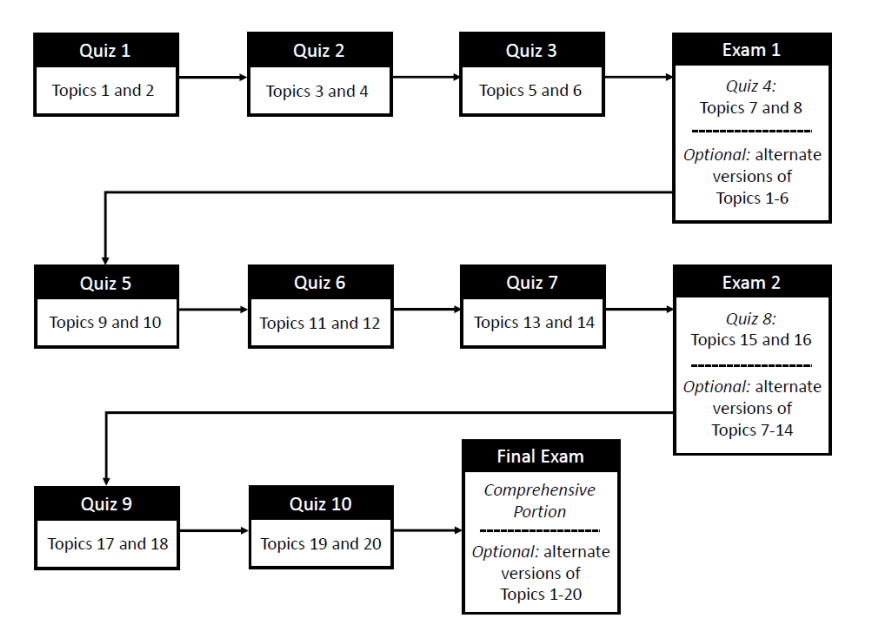 As part of his change to Second Chance Grading, Dr. Fernandez no longer assigns homework. Students have access to practice problems (which are similar to quiz questions), but these are optional. Now, 80 percent of the final course grade is made up of the 10 equally weighted quizzes (with the best score from all attempts used) and 20 percent is from the comprehensive portion of the final. He also allows his students to bring index cards to quizzes with brief reminders, formulas, etc. He shares a “guidance email” with his class before each quiz where he provides context as to where they should be focusing their studies, and he has explicit discussions with his students in class on quiz preparation and study habits. Dr. Fernandez feels that he met all of his criteria in redesigning this grading structure; it’s easy to manage, simple, equitable, diminishes student anxiety and emphasizes learning. But, what do his students think?

As of August 2019, 149 students have learned with Dr. Fernandez implementing Second Chance Grading. Of those, an impressive 139 submitted course evaluations. Among those, 59 percent mentioned this approach and 96 percent of them had only positive things to say about it. Sixty-two percent of the student respondents who mentioned Second Chance Grading took the time to write a substantive comment about it, and a bit less than half of those spoke to how Second Chance Grading decreased their levels of stress and anxiety with over half commenting that it improved their learning outcomes. Fernandez feels strongly that he has hit all of his marks and devised the grading strategy that he’s always wanted. From the looks of it, his students agree.

Current grading paradigms in higher education are antiquated, artificial, emphasize detrimental behaviors and are not aligned with real-world skills or expectations post-graduation. Those among us who see these trends are on the hunt for new approaches to grading that fix those issues and enhance the student learning experience. By all accounts, it appears that Dr. Fernandez has developed a superior strategy for measuring his students’ learning. And I for one will be unashamedly ‘stealing’ Second Chance Grading and implementing it in my Fall 2020 courses. Thank you, Dr. Fernandez.

Anyone interested in continuing this discussion on Second Chance Grading with Dr. Fernandez is welcomed to contact him at ofernand@wellesley.edu

NOTE: Dr. Fernandez’s work on Second Chance Grading has been accepted for publication in the educational journal PRIMUS and will be in press soon.

Do you see a typo or an error? Let us know.

Sometimes Flipped Learning Innovation Just Sneaks Up on You

Notes From My Journey to Helping Struggling Students Master Math

I love this idea as an introduction to Mastery Learning. I can say that I have had similar success working with 8th graders. Students have a much lower stress level when they know it is not single moments in the year that defines them as a learner. I would also point out that my best learning comes from my mistakes. If students are given a chance to learn in this way, the content will sink in much deeper than receiving a bad grade ever could. Education should not be punitive- it should be alligned to Growth Mindset principles. Nice post, Tom!

I found this idea to be very interesting but I suspect I had the same thought as many others. How do you fit all this time for testing into your schedule? Also, how does it work when students are taking quizzes of different links and therefore need different times to take the exam.