We’re beginning to see a pattern. Some of the most exciting work in education is happening where you least expect it. This was certainly true last week as we landed at a sleepy airport on a tiny island off the coast of Brazil. There wasn’t the slightest hint of the dynamism or the possibilities for Flipped Learning that would unfold 24 hours later.

Leaving the airport, we could see the view from every window that screamed: “quaint village” in an underdeveloped country. But driving 15 minutes down an uninviting road, we entered a dark tunnel and came out feeling like we had landed in Oz. The patchwork of ramshackle shops, homes, and streets gave way to a gleaming, soaring, strip of luxurious apartments. The view would fit seamlessly on the fashionable Miami beach. The buildings towered above a charming city with an old-world European flavor. Soon delightful surprises surfaced at every turn.

It’s possible that Florianopolis, Brazil may be one of the best-kept secrets in South America. Everything about the place just sneaks up on you. But quickly we began to understand why 2,000 educators gathered on this remote island to talk about disrupting education. More importantly, we realized that we had stumbled onto a fascinating case for the hidden power of Flipped Learning.

You’ll be hard pressed to find a country that is more in need of an education overhaul than Brazil. Students in the largest nation in South America hover around 100 points below global averages in reading, math, and science. Based on the most recent PISA results, Brazil’s 15 year-olds ranked alarmingly near the bottom on the list of 72 countries. 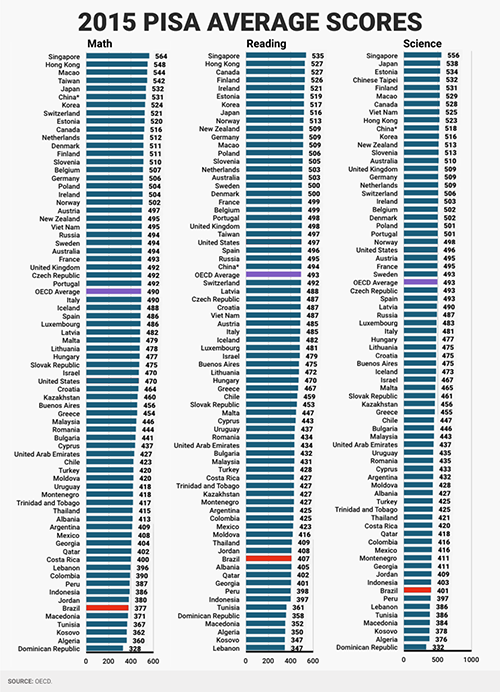 But the two numbers that are probably keeping Brazilian school leaders up at night are 260 and 75. The first is the number of years the World Bank estimates it will take Brazilian students to catch up to the rest of the world in reading. And 75 years is the time required for Brazil to hit the global average in math.

This morass is the result of a convoluted history too complicated to cover here. A history relentlessly tortured by politics, forced and unforced immigration, bureaucracy, failed education initiatives, and corruption. Google it…

Like the education challenges faced by countries around the world, the Brazilian crisis has attracted a global cast of reformers, innovators, and disruptors. In this case, the conference we attended was led by professor Fredic M. Litto, an expatriate from Brooklyn, New York.

Professor Litto rocks a subversive twinkle in his eye. His goal is to transform education in Brazil. In a word, his aim is “inclusion” — lifelong education available, accessible, and affordable to all. His vehicle is Online Distance Learning (ODL), which he describes as learning “365/52/7/24.”

Along with a group of some ten reformers, Litto formed the Association for Brazilian Distance Education, (ABED). Judging by the energy in the building, this band of reformers and disruptors are sure they have something valuable to offer Brazil. Based on the 24 years they’ve spent pushing distance education uphill, the vision and commitment of this group are undeniable. Today, ABED has a mailing list of 55,000 and attracts thousands of educators to their annual conference.

So what’s standing in their way? We talked with Fredic, some of his board members, and attendees about the challenges they face. With each exchange it became clear (at least to us) that Flipped Learning is a critical piece of the solution they have been searching to find since the end of the last century.

The Barriers to Reaching Every Student

We asked Litto to identify the most significant barriers to the ODL community’s vision of reaching every student in Brazil. At 80 years of age, Litto speaks with the bluntness of a man who has stopped mincing words a long time ago.

“Excessively conservative educators, governmental bureaucrats of education…all of them influenced by the university schools of education (especially the public ones), which are hard-line Marxists, who repudiate technology in education as a whole, and distance learning in particular.”

Thanks, Fred. Now tell us what you really think.

But perhaps the comment Litto made that we found most surprising was,

“In all honesty, I cannot predict when this sad situation will change.”

The last comment was notable because Litto exudes a natural optimism. Earlier in the week, he shared his excitement about being invited by the education ministry to discuss systemic reforms. So his candid comment seemed to run counter to everything we had heard about the progress ODL was making in Brazil.

Our conversations with others revealed a similar strain of optimism restrained by frustration and resignation — especially with the public school system. As one presenter said, “We need to be clear; there’s no magic bullet.”

Jon Bergman’s keynote presentation at ABED was striking on many fronts. He was one of the few presenters who was not a Ph.D. He presented in language that lacked the scholarly tone of most of the presentations we heard over the four days. But the standout feature was Jon’s provocation that Flipped Learning is a “magic bullet” with three magical qualities. Since the local nickname for Florianopolis is “the Magic Island,” the message seemed well suited to the venue.

— Driving change from the bottom up

The message was simple: Flipped Learning is a proven instructional model transforming all types of classrooms and learning around the world. The model empowers teachers, engages students, and makes learning a dynamic, active experience. Combining Flipped Learning with ODL enables educators to reach every student wherever they are, “365/52/7/24.” But most importantly, he underscored that the extraordinary adoption of Flipped Learning in countries around the world — in places as diverse as New Zealand to Iceland, Italy to Iran and USA to Korea, and Australia to Singapore — were driven from the bottom up. The takeaway was clear: Every person involved in ODL has the power to drive education transformation if they understand three things:

— How to drive adoption from the bottom up.

Jon’s presentation had a definite evangelical feel. No one shouted “amen,” but the audience audibly embraced the spirit of the message and left inspired. There was also wide interest in the surprise announcement of the Flipped Learning Brazilian Initiative. The trip ended with requests to participate in the new FLBI and a proposal to host a RESCON concurrent with the next ABED conference in Brazil.

The Hidden Power of Flipped Learning

Perhaps there are a few other secrets better kept than Florianopolis, Brazil. One is that Flipped Learning is embraced as “the magic bullet” by many educators around the world. It appears that Flipped Learning’s simplicity hides it’s proven power to transform classrooms and learning with a single paradigm shift. More importantly, the often overlooked and hidden power of Flipped Learning is that the transformation can, has, and is being driven from the bottom up. We find that this truth remains largely unknown to educators who live and work in the silos of their classrooms, schools, school systems or countries.

For example, this was the second visit to Brazil in which we pointed to Brazil’s neighbor in Argentina, (less than an hour away), who is already doing what Brazil is struggling to do.

As we travel around the world, it’s striking how powerless many educators at various levels feel. Many are frustrated by the education status quo and are convinced that any meaningful change must come from the top down. But the record is clear. Like Fredric M. Litto, the history of Flipped Learning doesn’t mince words. The global wake of Flipped Learning reveals that the broad adoption from k12 to higher ed has been driven by proactive educators at the bottom. Educators who used their discretion to change the game in their classrooms, achieved success, caught the attention of others and inspired a virtuous spiral of interest at higher levels.

This is just one example of what a global perspective teaches us about how Flipped Learning transforms education. Like the mystique of Florianopolis, and the possibilities of ODL, the power of Flipped Learning is hiding in plain sight. The good news is that the “magic” is easily accessible to anyone with open eyes and an open mind.

Think Clearer: Use Your Pen