Finding the Time: Yes, You Can

For many years, I complained that I didn’t have enough time to get everything done that needed to get done in my classroom. I had too many standards to get through, and there was no way to cover them all–no matter how much curriculum mapping I did. This lack of time caused me to become jaded, frustrated, complacent–the list of negative qualities goes on and on. Teachers just want to teach, but with state-mandated testing and infinite standards that have to be covered, ‘just teaching’ is not what we get to do, at least not in a traditional classroom. A line from a viral video summed up my time and mindset in my classroom: “Aint nobody got time for that!”

As I began flipping my class, I had all the time I could have ever wanted in my classroom, but as I soon learned, time is a gift and a curse. When I began flipping my class, I knew some fundamental principles about this new approach to teaching: One, initial and passive instruction took place at home, and two, students applied that knowledge in the classroom (the group space). I had no clue how to use all of this time I now had with my students. Not only did I not know what to do with all of the time I had with students, I felt like my students were bored in my class.

As I reflected on what needed to change in my classroom so that I could make the most of the time I had with my students, I felt like I had a bit of a lightbulb moment: projects. I loved project-based learning, and I was familiar with it from previous years of using it. My understanding of project-based learning was that kids do projects, but I distinctly remember a student yelling at me, years before, that he hated my projects. So after years of reflection on that one statement, I decided to do something that I thought was pretty radical (little did I know, my decision would become a foundational component to my implementation of authentic project-based learning): I decided to allow my students to create their own projects. That’s right…I let my students tell me how they wanted to represent the content. I shared this new idea with my students, and they thought it was the greatest thing ever, but they had a million questions because it seemed like there was going to be a catch. It was too good to be true. No one had ever asked them, “how do you want to represent the content?”

We started our first PBL unit, and all seemed to be going well. The students watched a video lesson at home, and then they came to class and directly applied that information to their projects. Now, this seemed great in theory, and it worked okay for a few days. It didn’t take long before I realized something: I had no idea if they actually understood the material we were covering. I then realized that I just needed to walk around and check in to see if they had any questions about the content. Then another issue arose: even if I was having short conversations with the students, with 22 students in a class, there was no way I could make it around to every student and have a conversation to check for understanding. There just wasn’t enough time. As I said earlier, time is a gift and a curse. Now that we have time, figuring out how to use it well was a curse. I was starting to feel as though when I put out one fire, another would pop right up.

I sat down and tried to determine precisely what the issues were and then developed solutions that seemed to complement one another. I had to think through a step-by-step process for making all of the things I wanted to do work well together. If I wanted my students to start off with a solid understanding of the content from the individual space, I needed to give my students time to figure out what they knew, what they had questions about, and how all of the content works together. I remembered a tool that a friend of mine had shared with me years prior. It was a tool that was rooted in Universal Design for Learning (UDL) and Backwards Design. The tool was called Turn ‘n’ Talk. The way it works is to pair students up so that each pairing has a card with four questions:

What these cards do is allow the students to talk to each other and dialogue about the content, address any questions that they may have had, and make connections to the material covered. I decided to use this tool at the very beginning of class. In a matter of five to seven minutes, the students could dialogue about the content and address their concerns. After that time, I determined that I would bring everyone together to resolve any lingering questions. Consequently, this meant that when we got together, the questions asked were meaningful, and the discussion that occurred would help all of the students to start strong for the day.

So, let’s bring this full circle. I started not having a clue how to use my time in the group space effectively, but that’s largely because I was a very early adopter of FL.  We now have a roadmap that shows the way towards successful FL that everyone can access called the Global Elements of Effective Flipped Learning. When I first flipped and tried something that failed, I embraced the failure (Element: Eb) by not letting it define me but allowing it to move me in a different direction. As long as I allowed my failure to push me in a new direction, I was learning from failure (Element: Fl). I knew that I needed to engage my students in an active way that would allow them to express their understanding uniquely, PBL (Element: As and Df). I knew that PBL would challenge my students to think differently as they approached the content. They would have to create, evaluate, analyze, and apply their knowledge in a meaningful way (Element: Hb). I determined that micro-conversations were a necessity as I moved throughout the room, guiding students as they worked on their projects (Element: Mc). 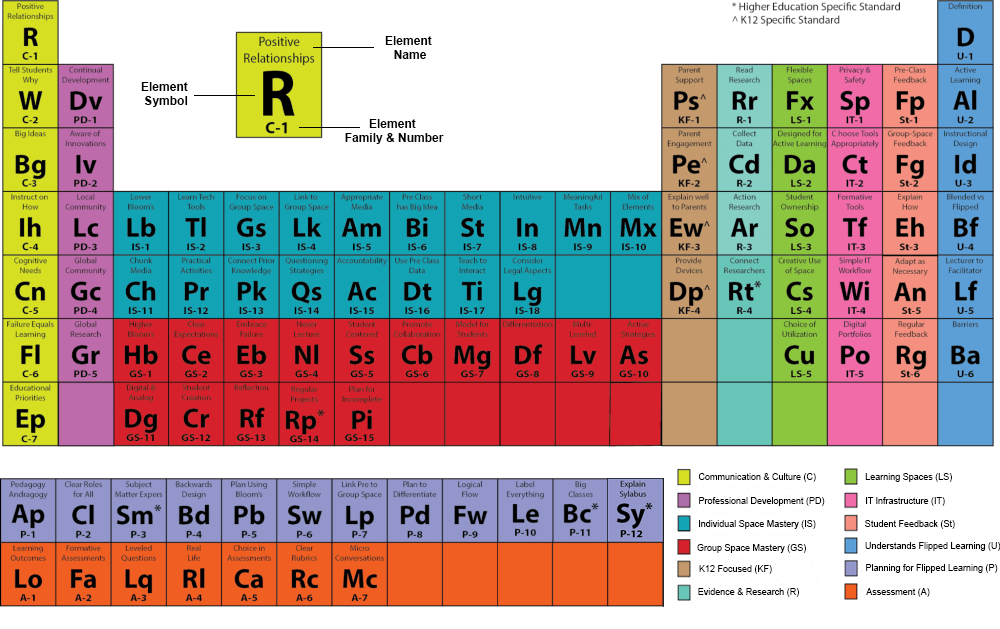 When the GEEFL table was released, it did a couple of things for me. First, it showed me what I was doing right. Second, it revealed areas of growth. Not only did it show me where to grow, but it also provided me with a roadmap towards growth. By having a group of elements that targeted the group space, I was able to look specifically at the group space and ask myself, what elements am I missing that would take my students’ experience to the next level?

Time in the group space can be a gift and/or a curse, but how you use it will make all the difference, and the GEEFL elements are here to help.

Solving the Challenges of Moving from Passive to Active Learning

This all rings so true! Thanks for sharing.