Failure = Learning: Education Is About Persistence, Not Perfection

Perfection is the educator’s greatest foe. The idea that I had to be perfect is one of the things that led me to consider leaving teaching. If you have read my other columns, you know that as hard as I tried, I continuously missed the mark of perfection. I viewed it as an impossible standard placed on me. Truly, perfection is not something that anyone expects of us; instead, our students, peers, and administration require something very different: persistence. It is so odd that perfection would be the goal that I placed on myself, but I viewed it as a litmus test to determine if I was good at what I was doing. Because I continuously failed at being perfect, I observed my situation through a lens of finality. Like Sisyphus constantly rolling his boulder up the hill of Greek mythology, I would never be the perfect teacher, so what was the point in continuing to teach. I am so glad I was so wrong.

Over the years, it has become more and more apparent that persistence and effort are more desirable qualities than perfection. I preach to my students about the importance of a growth mindset, but it was a message I also had to internalize. I would be lying if I said that I have completely overcome my insecurities about not being perfect at my job, but the truth is, I have come a long way from being the burned out teacher I once was. As I look at the year ahead, I am making some unorthodox resolutions. I am going to try to push forward knowing that I will fail. I am resolving to fail forward. 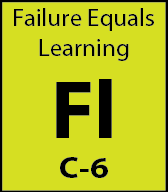 Failure is a process, not an end. Carol Dweck, one of the pioneers of a growth mindset, is cited by Anja A. in her article titled The Power of Yet-The Growth Mindset. Anja writes, “The main point that Dweck makes is that a growth mindset is developed through praise, but not the usual after-the-fact praise which focuses on outcomes, but the praise that focuses on the process of learning.” As we try new things in the group space, we are going to fail, so embrace it. Welcome it, and be changed by it. Failing does not translate to failure unless it is unaccompanied by reflection, and that is the mindset that must be corrected if educators are going to see failing as a positive.

Where does failing take you? Where are you allowing it to take you? For far too long, I allowed it to take me down, when I should have used it to propel me forward. In reference to the lightbulb, Thomas Edison said, “I did not fail. I just found 10,000 ways that won’t work.” The process of failing forward requires educators to understand that effort does not have an expiration date. Just because something did not work, we cannot see it as an end; rather, it is the beginning of a different way. The more time I spend thinking about how Failure Equals Learning, the more I understand the need to Embrace Failure.

The Global Elements of Effective Flipped Learning table is a great way to reflect on your classroom. The table offers encouragement while also allowing educators to address areas of their instruction that they would like to strengthen. Knowing that failure is a key aspect of best practices in Flipped Learning–it is a breath of fresh air. This year, resolve to fail forward. It means you’re trying, learning and that you haven’t given up. It means you’re growing.

My Daughter’s University Is Ripping Her (and Us) Off!

We Don't Know How Education Will Evolve but We Do Know This...

Well said Dan. In 2015, I started teaching a 9-week course on college and career readiness to 8th grade students. At the beginning of the class I told them that our focus was going to be on failure. I wish I would have set up a camera to capture their expressions. I was new to this school and I am sure the students were asking, “Where did they get this teacher?” I shared with them several quotes about failure, including Thomas Edison’s. We talked about failure – what it was, how it felt, what they learned from it, how their parents’ reacted. We also learned that it was a starting point to real learning. The students still talk about it today. In life, I have learned far more from my failures than my successes. Here’s to failing forward.