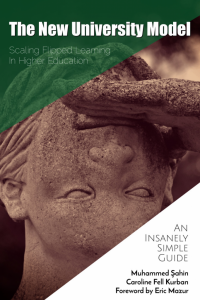 Our first attempt to reimagine higher education at MEF began in 2014. MEF University in Istanbul, Turkey, opened as the world’s first and only fully flipped university. MEF was the culmination of the lifelong dream of Dr. İbrahim Arıkan, who had started his career as a physics teacher. Though he went on to become a successful businessman, his first passion was always education. In the 1970s, he set up and developed MEF Educational Institutions (MEF standing for Modern Eğitim Fen – Modern Education and Science). By 2000, it included two national K-12 schools and two international K-12 schools. Becoming a renowned businessman and educator and the recipient of honorary doctorates nationally and internationally in both fields, he decided to move forward with his dream of opening a university. However, his experiences as a CEO and educator told him that the current higher educational model was not the best fit for the needs of today’s economies and industries. The model would not effectively prepare students for the workforce they would enter. He was unwilling to open an institution that was merely a copy of what was already available. He wanted an innovative teaching and learning approach that would move university education forward in the same way he had improved K-12 education in Turkey. So Arıkan brought on board seasoned university rector Professor Muhammed Şahin and challenged him to find a new approach to suit the needs of modern university students and industries.

As Şahin started to investigate new learning approaches, he was reminded of a presentation he had seen by Harvard business professor, Clayton Christensen, at the American Council on Education in 2011. Christensen’s message, about how best to educate and prepare the instructors who would be teaching the Z generation in a digital environment, resonated with Şahin. He was drawn toward learning models that embraced, rather than fought against, advancing technologies. It was at this point he found emerging articles on Flipped Learning, which involved the effective combination of digital technologies, student-centered learning, and authentic learning experiences in its learning approach (Berret, 2012; Deslauriers, Schelew, & Wieman, 2011; Epstein Ojalvo & Doyne, 2011; Fitzpatrick, 2012; Gifford, 2012; Lambert, 2012; Overmyer, 2012). He was struck, in particular, by the success story of Clintondale High School in Detroit. Clintondale was a school in an area with significant economic challenges where historically students consistently failed courses, and many students ended up dropping out of school. Principal Greg Green realized the struggles in Clintondale had more to do with the flaws in the educational system than with problems with their students. In collaboration with a local software company that specialized in video tutorials (Techsmith), Green trialed the Flipped Learning approach in several ninth-grade classes. The trial proved extremely effective:

Also, other newly published studies were showing that there was evidence of increased student satisfaction and success in flipped courses (Ferenstein, 2013; Zhang, 2013). Confident in his belief that Flipped Learning would provide the innovative new approach required to open MEF University, Şahin reported back to Arıkan.

Excited but cautious, Arıkan instructed Şahin to set up a focus group of professors to gather their opinions. In May 2013, Şahin presented the concept of Flipped Learning to 25 associate and assistant professors from the top universities in Istanbul. However, around 80% of the responses were negative; instructors could not see what their role would be in this learning approach. Şahin reported the results back to Arıkan who, undaunted, requested that Şahin run another focus group, but with students from the same universities. Once again, he presented Flipped Learning, then sat back and listened. This time, the vast majority of responses were positive. The students liked the concept of Flipped Learning. They thought this would be an effective approach to educate their generation-the first generation to blend the physical and digital aspects of life. Armed with this feedback, Arıkan, Şahin and the MEF University Governing Board agreed that the Flipped Learning approach would fit the teaching and learning vision they had for MEF University and decided that MEF would be established as a fully flipped university.

Preparing for Flipped Learning proved to be a challenge. However, a small team of dedicated individuals stepped in to take on the challenge. The first challenge was spatial: to determine the ideal location and set up the building. To be close to the heart of Turkey, the team decided to locate MEF in the central business district of Istanbul. Then they carefully designed the physical spaces to include active-learning classrooms. Open-plan design labs also promoted active learning. The second challenge was to recruit staff who could teach in a flipped model. The team looked for flexible risk-takers who were excited to face the challenges inherent in a start-up institution. The third challenge was creating the technological infrastructure. MEF needed a recording studio, a learning management system (LMS) to host courses, and a digital library. Despite all these obstacles, the team persisted. And by 2014, MEF University was ready to admit its first cohort of students.

As with any new endeavor, there were both big wins and significant challenges. The biggest win that first year was how quickly reticent professors moved to Flipped Learning. From day one, instructors planned and taught flipped courses with much success. However, in the first semester, only 50% of the classrooms followed the active-learning design. When students and instructors gave an overwhelmingly positive response regarding these learning environments, the rest of the classes were converted to the active-learning design before the start of the second semester. Student surveys conducted mid-semester, and student course evaluations consistently showed that students were happy with the Flipped Learning approach.

The biggest struggle that first year was getting students to engage with the digital materials and also come to class. Despite liking the flipped approach and the active learning classrooms, students did not always watch the videos before class. And if they did, some students felt they learned everything from the videos and, therefore, didn’t need to come to class at all. Conversely, some students watched all the videos and came to class but did not actively participate when there. It was clear that there was dissonance between our educational philosophy and that of our students. To overcome this dissonance, we identified the root cause. To do this, we turned to Jobs Theory and began to investigate whether our product was doing the job students needed it to do.

One of the keys to innovation is seeing issues and failures as natural parts of the process. Initially, it was easy for MEF to see the problems with student engagement and participation as a natural part of the innovation process. Upending the entire traditional model of education was bound to encounter obstacles. Low student engagement was put down to the lack of motivation of the students or a lack of training in how to engage with Flipped Learning. Videos were not engaging enough to attract students’ attention. Low participation in class was put down to the cultural educational background of students in Turkey who are used to a passive learning approach.

At first, we attempted quick fixes to overcome these issues. Students received more training on how to be effective Flipped Learners. Instructors spent more time making quality, interactive videos. Some instructors started giving grades for online work or introduced graded pop quizzes in class. Motivational speeches about how students would need to become more active learners to be successful abroad were delivered. We even tied engagement to helping them with graduate degrees and with gainful employment in international companies. However, none of these quick fixes led to much change. And recalling the story of Toyota’s success compared to U.S. automobile manufacturers, neither do they lead to disruption in the market, which was our goal. Quick fixes lead to companies – or in our case, universities – being left behind.

We had not identified the real root cause of the problems. It was at this point we decided to drill down into what jobs students were hiring our education to do. We went to our market, running focus groups and surveying our students. Soon, an obvious root cause of lack of engagement in the flipped approach began to emerge. The flipped approach at MEF involved students watching videos before class, coming prepared with that knowledge, and putting that knowledge into practice in student-centered, authentic activities in the classroom. But when we asked our students why they were not engaging with the pre-class videos or attending/participating in class, they said that their main concern was passing the exam at the end of the course. We were designing courses like Jorge’s while still relying on final exams like Geoff’s – a disparity between instruction and assessment that students found difficult, if not impossible, to ignore. Flipped Learning values ongoing learning and engagement, but our assessment structure communicated a different value – gaining knowledge to pass a test. This was our “aha!” moment, and we should not have been surprised. Flipping instruction without flipping assessment had the effect of inadvertently signaling that the value of learning was still in the final exam, not the learning process.

A Problem Without a Solution?

Then we went deeper. We asked instructors why they implemented mid-term and final exams in their flipped courses. There were two significant factors. First, the concept of exams as an evaluation of student performance is deeply ingrained in higher education. Many instructors described how they believed mid-terms and finals were appropriate, as this was how they had been assessed at university. Second, external accreditation bodies, such as councils of higher education or professional accrediting bodies, demand the use of specific assessment models.

On our own campus, we started by naming the problem and making changes. By establishing ourselves as a fully flipped institution, we had aimed to redefine the industry of higher education. However, by the end of our third year, we had not fully solved the root problem. Though our flipped courses provided student-centered, active learning, we still hadn’t changed the way we assessed student success. We had inadvertently devalued our flipped approach by flipping instruction but maintaining traditional curricula and assessment. We had not embedded the Flipped Learning philosophy into all three channels of learning. We had tried to fine-tune the educational approach instead of redesigning it, and this meant our educational model was not fulfilling the job it had been hired to do. Back, as they say, to the drawing board.

It has now been five years since MEF’s first students enrolled. The first cohort graduated in the summer of 2018, an occasion for great celebration. In those five years, MEF has grown steadily, continually reaffirming its vision to educate innovative and entrepreneurial global leaders to shape the future. This process has not been without challenges and setbacks. However, at every turn, we have stopped and identified the root cause of problems, rather than attributing them to normal growing pains and covering them with proverbial bandages. Five years later, we are still learning, growing and evolving. And five years later, we still believe Flipped Learning is the key to transforming higher education.

Under the Hood: Flipped Learning at a Completely Online University

Congrats Caroline Fell Kurban and MEF University. Five years mean a huge experience for an higher education case in which flipped learning has been used a officially applied teaching/learning methodology. This was new for both teachers and students. Flipped learning works very well, in terms of learning, so, maybe it’d be better to start to integrate it in earlier classes, K12 e.g. And somebody(!) should (and will) start using it in K12 classes asap as “we still believe Flipped Learning is the key to transforming higher education” and learning.