For the first time in almost two years, the editorial team had vastly different opinions about an article submitted for publication. In other words, we disagreed… GASP! The very close-knit FLR team of educators and editors disagreed strongly enough that it led to multiple email exchanges, text messages, and the magazine going offline while we dealt with the conflicting views. With the deadline looming, we held an emergency virtual powwow in the cloud via Skype. Smells like trouble, doesn’t it? Is the honeymoon over? Is this the beginning of the end of FLR magazine? Who would be the first to hit the eject button and bailout?

The article was our first attempt at “reporting.”  Instead of writing a story from our own perspective, we picked an issue important to the Flipped Learning Community, interviewed educators, searched for answers, and went where the facts led.

We struggled with perception and fact, bias and objectivity, authenticity and truth, personal and group values. You know, the lightweight, small talk you enjoy with colleagues over a cup of coffee or glass of merlot.

If you were a fly on the wall, you would have read and heard a spirited case for going ahead with the article as written. The “argument” was backed by supporting principles and second opinions. Next up, the equally emphatic dissenting view was presented with detailed examples of where the article missed the target and very specific suggestions for changes. You would have heard point, followed by counterpoint, and one round of exchanges that ended with “Either way, though, I strongly feel that the missiles need to go.” The editor was referring to the image at the top of this article.

The group was practicing what Kim Scott calls “radical candor.” It’s the widely unpopular notion that we should honestly share our views and opinions and allow group members to candidly respond with their thoughts.

The theory goes that if we can park our egos at the door, candor and constructive conflict lead to:

2. The best ideas and solutions

What the flip?!! Does conflict lead to better relationships?

Candidly, not everyone bought into it. However, the members of FLR’s editorial team gingerly embraced radical candor and today (a year and a half later) was the midterm exam.

The Trouble with Avoiding Conflict

Instead, a subtle shifting started to take place, as all views were considered. The ideas that rang true were validated, the ideas that didn’t were discarded (including some I really liked). By the time we signed off from the 30-minute Skype call, we had six things:

We are in a field where relationships are everything. Flipped Learning educators double down on this value by elevating relationships to the top of our priorities pyramid. So we routinely do whatever it takes to maintain our relationships and avoid major conflict. When disagreements do bubble up to the surface, things can get uncomfortable faster than a third grader’s attention span. The tendency can be to avoid the elephant in the room at all costs. The result is that the conflict is often ignored or suppressed and the potential for group growth is lost. There is a sizable body of work that concludes constructive conflict is good for relationships. More importantly, the idea that we can avoid conflict and have strong relationships is a myth that can hold us back.

In this issue, we explore seven more myths that may be preventing us, individually and collectively, from reaching our potential to transform education. But we didn’t just stop at naming the problem, we explored strategies to rise above them. I learned something fresh from each one, and we hope you will too.

In case you’re still wondering. The FLR editors passed the midterm test. We also agreed that we should share with you the conflict that went on behind the scenes of this issue. Oh, and the missiles? The graphic didn’t suit the other article and so we replaced it. The image found a new home on top of this article. And though the image overstates the conflict we actually experienced, it accurately represents the potential level of conflict that we successfully avoided. The conflict was reduced to zero through radical candor, radical humility, and a radical commitment to finding the best possible path forward. Hail to the team!

What Filled Your Classroom Yesterday Isn't Filling Them Today, Why?

What You Can Achieve With a Personal Touch in Higher Ed 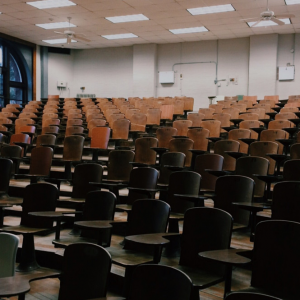 What Filled Your Classroom Yesterday Isn't Filling Them Today, Why?

-Muhammad Sahin and Caroline Fell Kurban - In the beginning, higher education was for the privileged few, a source of knowledge...