MY BAD – 24 Educators Who Messed Up, Fessed Up, and Grew

Rarely has there been a book that speaks to the heart of educators without telling them how to improve, what to do differently in the classroom, or answer some philosophical question about the education universe. Jon Harper’s new book, My Bad: 24 Educators Who Messed Up, Fessed Up, and Grew!, does just that. In his own words, “My Bad isn’t a book telling you how to be a better teacher. There are many books that do that quite well. My Bad is a book reminding you that being imperfect puts you in good company.” This book explores the imperfections that have helped form great educators into the people they are today. 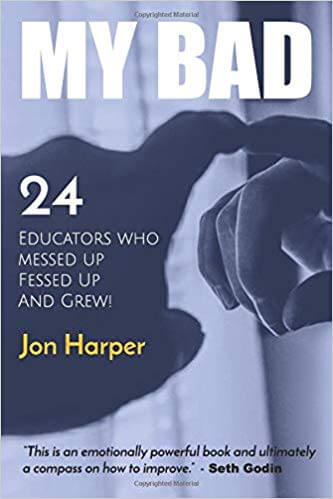 Jon Harper is well known for his podcast called My Bad, but he is also an active educator. He is the assistant principal at Sandy Hill Elementary School in Cambridge, Maryland. He has taught in the classroom while earning his National Board Certification. It is clear that Jon loves what he does at the school, but his passion for the social and emotional support of teachers is deeply rooted in him. It is that passion that gave birth to his podcast, My Bad. Jon writes a blog on his website, https://jonharper.blog/, and he also co-hosts another podcast, Teachers’ Aid, which is sponsored by Flipped Learning Worldwide on the Bam Radio Network. Transcripts of Teachers Aid episodes appear in each issue of FLR Magazine.

If you have ever felt alone in your educational journey, ever felt like you made a horrible mistake in your career, My Bad is the book to make you feel like you are in pretty good company. We tend to feel alone when we close ourselves off and refuse to share our experiences with others, and Jon Harper set out with a mission to make sure educators knew that everyone makes mistakes, and we can find comfort in knowing we are not alone. In his book, Jon allows his readers to see the side of educators that don’t show up on social media; the side that we often hide from the public, our peers, and even our family. His introduction unexpectedly grabs the reader’s attention. He personalizes the stories by starting with himself. His story is shocking, and yet relatable. It isn’t what I expected from the author, podcast host, or assistant principal, but it was authentic, and it allowed me to see that I am not alone in my journey.

The book is broken down into themes, and each one consists of four stories. I was surprised with each story, not because of the content, but because of who the story was about. To read the mistakes that some of the most current influential educators have made allowed me to breathe more easily. I knew that my struggles as an educator were not isolated to only me and that there is comfort and encouragement in knowing that my mistakes do not define me, rather they propel me. Jon includes a story about Dave Burgess and his mistake regarding the students’ response to a lesson he had spent hours preparing. His story hit me to the core because his story was one that I have re-lived many times. But even more than his story, his resolution was profound. He said, “Everything that happens in the classroom is just feedback. There’s no such thing as true failure. It’s all feedback.” What a powerful takeaway to understand that my mistakes aren’t final, they are feedback. At the end of each story, we, the readers, get to see how mistakes were remedied and how these amazing educators grew in their understanding of students, colleagues, relationships, parenting, and family.

One of the book’s features that really stood out to me was the inclusion of QR codes. At the end of each story, Jon includes a QR code that takes you to the My Bad podcast episode where that story was first told. This added element allows the reader to hear the story in the educator’s own voice. The power of this comes from being able to hear the emotion (frustration, sadness, awareness) directly as it relates to the mistake and the growth that followed. Hearing the stories is an element that makes each one genuine. These stories are personal, meaningful, and at times need to be heard to be fully understood and appreciated.

Though My Bad is only 133 pages, I found that it took me days to read; not because it was complex or deep, but because the heart can only take so much at a time. I read it in small doses so that I could process, connect with, and grow as a result of what I had read. To steal a line from Jon’s podcast, “I hope this book was as good for you as it was for me, and if it isn’t…My Bad.”