187 Ways to Improve Your Flipped Classroom

Here’s how I found 187 ways to improve my flipped classroom. It all started as an idea for an idea. And to see how that idea formed, let’s rewind two and a half years into the past. In early 2017, Jon Bergmann sent out a mass email to flipped educators across the globe. In that email was a video in which Jon made the case for Flipped Learning (FL) being a superior approach to teaching (which, I’m sure, the majority of the email recipients already believed), and then he ended with a surprising request. Jon asked for help. The FL movement had already gone global, and there was too much for Jon to do on his own. The email featured a link, and if we were interested in helping the FL movement, we were encouraged to follow that link and fill out some information about ourselves as educators. Perhaps not surprisingly, I complied.

Not long after, I received a response from FLGI inviting me to participate in a vetting program. Hundreds of respondents to Jon’s email would go through an orientation and training program that would slowly cull our numbers down to two dozen or so. Those of us who made it through would be part of the founding International Faculty of FLGI. That training program was intense. I learned so much about Flipped Learning, about how my peers implement FL across the Earth, about communication, leadership, and about myself. It was joyous and frustrating, exhilarating and — yes — grueling. But as it ended, I was among the last few still standing, and I’d made it onto the faculty. In all truthfulness, it was one of my prouder professional moments.

We had about one day off before we were provided with a shortlist of FLGI initiatives in which we could be a part. We were asked, which one(s) resonate with you? Where do you think your strengths lie? What would you like to be part of? One item on that list was the creation of a monthly flagship periodical that would highlight cutting edge trends in FL on an ongoing basis. I like to write and I read about FL for pleasure anyway, so I thought, “Yep, sign me up. I’ll do that!” I imagine it’s no surprise to any of you that here, 17 issues and well over a year and a half later, the Flipped Learning Review (FLR) is the culmination of that initiative. One of the other ideas on that list was just that: an idea, and nothing more. That proposed initiative read something like this (and I’m paraphrasing significantly): ‘Flipped Learning is being implemented in silos by well-meaning, but sometimes not fully informed, practitioners. The FL community needs a consensus definition of FL and a set of best practices by which to measure and improve their implementation.’ Hmmmm…. I thought. Interesting. But not something that plays to my strengths. I’ll pass.

Worth a second look

The months ticked by. The faculty on the definition and standards initiative worked tirelessly. They recruited hundreds of delegates from  49 countries. The first thing they accomplished was the release of a consensus definition of FL. This definition was free of educational jargon and buzzwords. Educators and the public alike can understand it. It remains, by far, the best definition of FL to be released. It is impressive. While my head was deep down in planning for FLR, I did come up for air long enough to appreciate the hard work that went into that definition.

These elements of effective Flipped Learning were arranged by the FLGI brain trust into a beautiful table that is intentionally reminiscent of the periodic table of the elements. 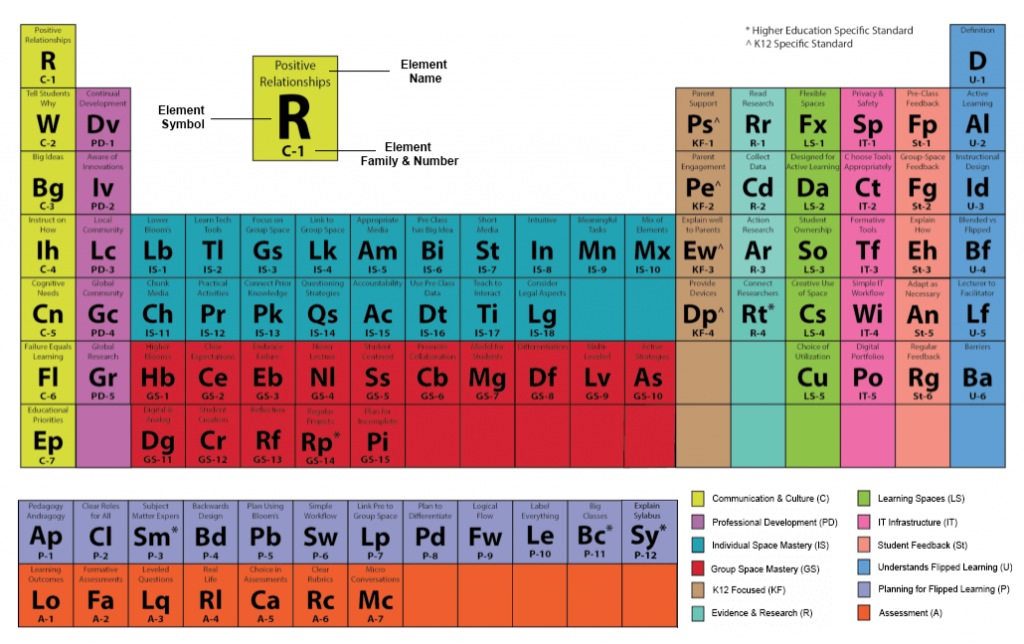 And just as that chemistry table organizes complex ideas into a visually simple interface, so too does the GEEFL table.  Click to see the interactive version here.

It was an enormous accomplishment; it was awesome, and… then what…?

Soon after the release of the GEEFL standards, we highlighted them in the October 2018 FLR issue. The editors of and contributors to FLR reflected on how the GEEFL standards could be used to self-evaluate our own implementation of FL and improve on our practice. Not long after that, the suite of online certification courses offered by FLGI was revised entirely and organized around the individual GEEFL standards. Each time a different best practice is highlighted in a certification course, the element corresponding to that standard emerges on the screen. It was then that I began to appreciate the power and scope of the GEEFL initiative. All of FL aligns with these standards. Eureka! The GEEFL table is our roadmap.

That roadmap came fully to life for me a little over a week ago. In late September, I was honored and privileged to accompany Errol St. Clair Smith to Anahuac University in Mexico City, Mexico. We were there to coach and advise 35 faculty members on how to adopt and implement FL effectively. In planning for those sessions with Errol, I saw the roadmap of the GEEFL table manifest. Firstly, we flipped FL professional development. All 35 participants at Anahuac first watched online video content introducing them to FL before we arrived. This action provided them with context and background before the session started. Then Errol and I led the group through workshop activities on lesson planning, video creation, self-assessment of learning resources, group space activity design, planning to start a flipped course, assessing the outcome of a flipped course, and personal reflection on the entire experience. Every component of that entire weekend was informed by, modeled after and underpinned by the GEEFL table. And throughout the weekend, there was laughter, joy, camaraderie and a few shed tears as the weekend wrapped up.

So as we celebrate the one-year anniversary of the GEEFL elements and table this month, let’s also appreciate the cycle of learning that these standards allow. The GEEFL standards not only allow current practitioners to hone and improve their craft. The standards also inform and guide the next generation of flipped educators. They are the roadmap we promised them to be. They are the blueprints for superior education. And in just one short year, those blueprints are already being used to build incredible houses of learning, not only in Mexico City but around the entire world. Time flies when you’re revolutionizing teaching and learning! Happy Birthday, GEEFL!

Here's How You Can Be Sure You're Doing It Right